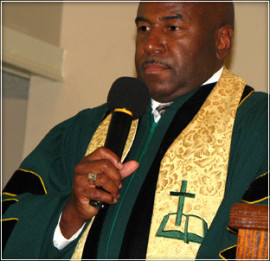 “I can do all things through Christ who strengthens me.” (Philippians 4:13)

Dr. Carl R. Nelson was born on August 29, 1954, to Susie Mae Nelson and Richard Lee Nelson in Olive Branch, Mississippi. At an early age, Dr. Nelson accepted Jesus as Lord and Savior at the Mt. Vernon Baptist Church in Memphis, Tennessee, under Dr. James Netters. In 1972, while still at South Side High School, Dr. Nelson accepted his ministerial calling. He was licensed to preach the gospel of Jesus Christ by Dr. John Johnson at Hurts Chapel in Olive Branch, Mississippi. After graduating from South Side High School in 1973, he joined the United States Army and simultaneously studied at the University of Kentucky until his military obligation was up. He continued his studies at Western   Kentucky University, where he earned a Bachelor of Arts Degree in Sociology. He later received a Master’s Degree in Theology from the Southern Baptist Theological Seminary and a Doctorate in Christian Counseling from the Jacksonville Theological Seminary in Jacksonville, Florida. Dr. Nelson later returned to the United States Army to serve as chaplain to the soldiers and their families. After 20 years of service, Dr. Nelson retired at the rank of Major with an honorable discharge. Over the next 14 years, he served as the Psychiatry Chaplain for the Tennessee Department of Corrections. While serving these two fine institutions, God blessed as many souls came to Christ and are now pastors, missionaries, and Christian business owners. God directed Dr. Nelson to minister to gang members and their families. Because of his dedication, on February 10, 1994, he was shot and left for dead in his driveway for spreading the gospel of Jesus Christ to members of the gangs who were turning their lives over to Christ. No weapon that is formed against thee shall prosper, and every tongue that shall rise against thee in judgment thou shalt condemn. This is the heritage of the servants of the Lord, and their righteousness is of me, saith the Lord. - (Isaiah 54:17)

God blessed Dr. Nelson to start the Christ the Rock Missionary Baptist Church (CTR) on June 8, 2001. The vision that God has given Dr. Nelson for CTR is to lead individuals and families into spiritual maturity and life-giving relationship with our Lord and Savior Jesus Christ, give correction to traditional religious and erroneous teaching, heal the broken-hearted, preach deliverance to captives, and recovering of sight to the blind, to set at liberty them that are bruised, and preach the acceptable year of the Lord - (Luke 4:18-19).

Dr. Nelson is married to the very beautiful Brendalyn Nelson. She has continued to inspire the congregation alongside her husband and prove that behind every good man, there is a good woman.